Includes the description of "Beginnings of the Space Age" series, and other videos. Also include the showing date and time for each year.

The roots of America's space program are the focus of "Beginnings of the Space Age," a multi-part documentary series exploring the intriguing characters and pivotal events in the stories history NASA's Jet Propulsion Laboratory (JPL). The series leads viewers on a dramatic journey into America's history of space exploration that began on the trails of a Southern California canyon wash, launched the United States into Earth orbit, reached the moon in advance of the Apollo astronauts and accomplished the first-ever encounters with Venus and Mars and the first grand tour of our solar system.

This series is produced by JPL's Office of Communication and Education. The JPL Library and Archives usually shows the series during Summer on a weekly basis. The DVD's can be checked out from the Library. The JPL Store sometimes has copies for sell. Descriptions of each episode are taken from the package covers.

As of late 2020, the series is available for streaming from JPL's external web site, on the Documentary Series page. 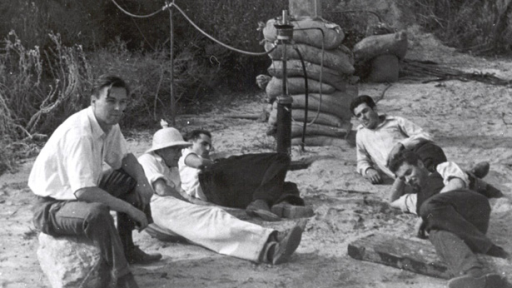 The 90 minute "American Rocketeer" tells the little-known and controversial story of Frank Malina, who was a Caltech graduate student studying aviation engineering in the 1930s when two young men wanting to build rockets approached him. He agreed to team up, having no idea of what that decision would men to his life, to Caltech and to the nation. -- Today, space probes designed, built and managed within earshot of that first rocket firing on a desolate Southern California canyon wash have reached every planet in our solar system and peered well beyond its boundaries. Each probe carries on it the logo of NASA's Jet Propulsion Laboratory. But more importantly, each probe carries with it the legacy of scientific and engineering excellence that began some three-quarters of a century ago in an isolated, scrub-strewn gulch northeast of Los Angeles. -- On Halloween day in 1936, Malina led a ragtag group of amateur rocket enthusiasts to the Arroyo Seco, where they conducted their first stand-up rocket engine test that would lay the groundwork for the Lab's founding. Malina personal letters, drawings and paintings reveal an extraordinary story of how JPL came to be. Thought many other fascinating characters populate "The American Rocketeer," at its core the film is a personal story of one man's dreams -- and how his ideas and idealism put him on a collision course with the world.

The 60 minute documentary reveals how JPL an the U.S. Army could have been the first to place a satellite into Earth orbit, had they only been given the chance. That opportunity was lost when the Eisenhower administration, unsure of how the Soviet Union would react to a satellite launched under the aegis of the U.S. Army military, hesitated and assigned the project to a civilian-led program called Vanguard. The Soviets launched Sputnik in October 1957, shocking the world and setting in motion the Cold War's "Race for Space." Only after the Vanguard rocket exploded on the launch pad were JPL and the U.S. Army given a chance. The result was 1958's Explorer 1, the first successful U.S. satellite, which also delivered the first-ever scientific discovery from space.

"Destination Moon" is the third in the trio of documentaries about the beginnings of the space age. It documents JPL's ambitious plan to beat the Soviet Union in robotic space exploration by reaching not only for the moon, but also Earth's neighboring planets Venus and mars. But as the hour-long episode documents, JPL would be humbled by a series of failures in attempting to merely hit the moon, let alone visit other planets. "We didn't know we were doing," one veteran JPL engineer confides, "and ether was no one around to tell us." This film shows how JPL did learn to go to the moon and to Venus, bestowing on the United States a true "First in Space."

The Changing Face of Mars

Of all the planets in our solar system, Mars has always held the most fascination. -- This is the story of the first pioneering missions to reach Mars and how each encounter resulted in surprise, dismay or delight for those who first took us there. "The Changing Face of Mars" documents the challenges of NASA's Jet Propulsion Laboratory to be the first to reach Mars as part of the Race for Space against the Soviet Union in the 1960s. The story told through archival footage and interviews with key scientists and engineers, documents JPL's efforts to build and fly the first spacecraft ever to visit Mars, the first spacecraft ever to orbit Mars, and the Viking orbiters that ferried NASA's Viking landers it the Red Planet. For much of human history, Mars was no more than a tiny reddish dot in the sky. But beginning with Mariner 4 and the first close-up images of Mars, our understanding of the history and nature of the planet changed radically. Subsequent missions revealed grand views of an ancient, cratered surface, polar caps, canyons and volcanoes.

The Stuff of Dreams

The Footsteps of Voyager

The introduction of the Space Shuttle in the 1980s began a new era in America's space program. This new vehicle offered both opportunities and challenges for NASA's Jet Propulsion Laboratory (JPL), and its arrival coincided with the opportunity to fly new robotic missions. JPL would be among the first to demonstrate how the shuttle could be used for space science with its pioneering missions to map Earth's surface with radar. However, for missions like Galileo, destined for Jupiter, riding aboard the shuttle introduced major engineering challenges. At the same time, the legendary Voyager 2 was in the midst of its triumphant Grand Tour of the giant outer planets. Drawing on rare film footage and the memories of the engineers and scientists who were there, this 60-minute film brings alive again the dramatic experiences of these first-ever encounters at Uranus and Neptune. As scientist Carl Sagan declares in the film, those who designed, built and operate Voyager are "heroes of human accomplishment. Their deeds will be remembered in the history book." And in this remarkable documentary, The Footsteps of Voyager.

Hubble in 1990 meant trouble. The highly touted telescope was designed to escape the Earth's blurry atmosphere, yet its creators were shocked to learn that it was cruelly nearsighted from a minuscule flaw in its lens. Enter NASA's Jet Propulsion Laboratory's scientists and engineers, who offered up an ingenious solution to Hubble's woes. But would it work?  Just one adventure in the nineties for JPL, Hubble summed up what would be a decade of striking achievements and deeply disappointing setbacks, an era when new opportunities to explore the cosmos collided with the constraints of shrinking budgets. The Magellan craft, nicknamed Salvage I for recycled parts, barely survived its arrival at Venus. Galileo, destined for Jupiter and at the time the world's most sophisticated spacecraft, skirted mission failure when its main communication antenna refused to unfurl. And Mars Observer, the first mission to the Red Planet in nearly two decades, would mysteriously disappear just before setting into orbit. All these missions, those that succeeded and those that failed, shared the pure spirit of the epic journey of discovery, and the indomitable ingenuity of engineers striving to rescue the machines lofted far above the foundries of their creation.

It started with an order to land something on Mars - cheaply. In NASA's new era of "faster, better, cheaper." this mission had to create a radically different way of building a spacecraft.  "The Pathfinders" tells the story of a small group of JPLers who dismissed warnings that a cut-rate mission to Earth's distant neighbor would cut short their careers. With a Martian parachute that could not be tested in Earth's atmosphere, and the last-minute addition of a remote controlled vehicle that would not look out of place in a toy store, the Pathfinder mission was a doubter's dream.  Yet the future prospects of JPL, and of a Mars program in its infancy, depended on bouncing successfully onto the rocky Red Planet and releasing a curious six-wheeled wanderer, in hopes of starting a revolution in space exploration.